My second foray into obstacle racing took place last weekend with a Total Warrior 12km in Leeds. I was quite excited about it apart from the electrocution and freezing ice dip. For the two weeks prior I had a number of chiropractor visits and lots of back issues but no excuses, I was up for the challenge.

On the day Jon and I arrived at Braham Park to a well organised car park and registration set up. Soon we were kitted out with headbands, tattoos, timing chips and numbers. The staff were very jolly (it was a little drizzly) and set us all up for a fun event. After writing our numbers on our headbands and putting them on we felt a little Ramboesque and retired to the car to wait for the rest of the team. 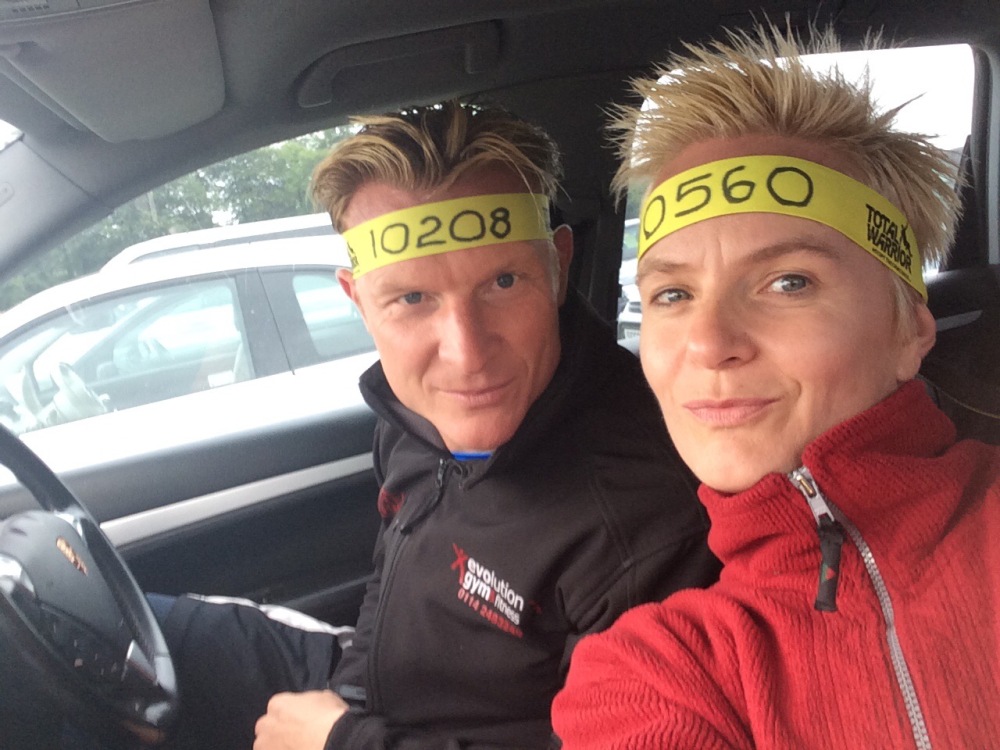 The team was made up of my work colleagues. 7 of us in total we met in nervous anticipation and headed to the start line. 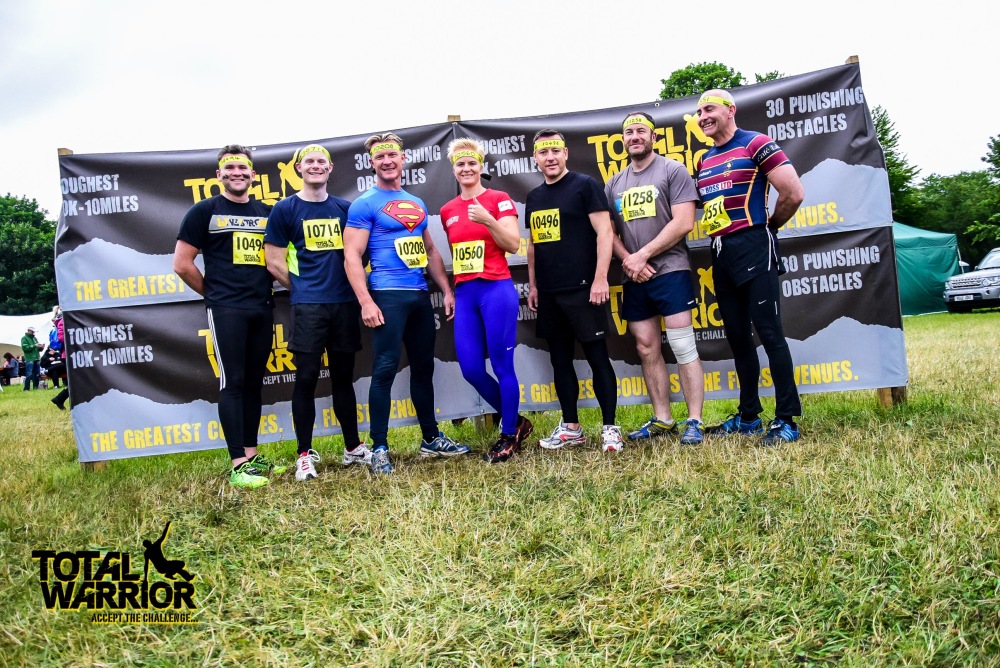 To get us in the mood we entered the starting area through a small tunnel and were encouraged to get into chanting Total Warrior! Total Warrior! As we agreed on tactics, that is that we go as a team, we were off. Yellow gas canisters were released and it was a little like coughing and spluttering our way through smog.

A false sense of security was created by the first kilometre being downhill, with all the people, testorone, excitement and nerves it was a giddy first stretch. The first obstacle was an extremely steep hill which we had to run up and then down three times, this got the blood pumping and the quads burning. It was already apparent that our team had splinter groups, a clique within a clique. I brought up the rear happy to be keeping up with 6 blokes with my dodgy leg ( in fact dodgy body ).

Tip 1 – do not wear eleasric laces in a mud run – great for triathlon transitions rubbish for keeping the shoe on.

Jon had to delve up to his armpit in mud to retrieve said shoe, it started the giggling off then and I don’t think we stopped until the the end.

The Fab Four as we now refer to ourselves, stuck together all the way round, we conquered every obstacle as a team and I absolutely loved it. The other runners were equally as awesome as us, it was great to help someone you didn’t know over a wall or a mud bank to have the favour returned at the next unscalable blockage. At times we walked, at times we nearly cried (well I did) but to complete it was brilliant. 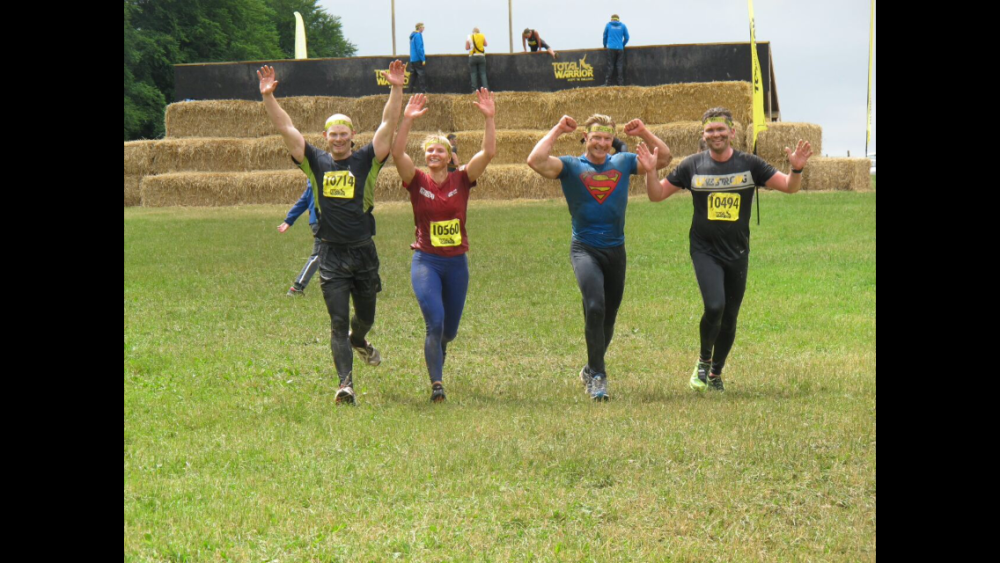 My dreaded ice water was in fact a blessing, when you were hot and tired a slowdown and cool off was welcome. The only downside was the colour and consistency of the water none of the crystal clear iced water I was imaging in but more a gloopy soup of very cold, very dirty slush. The dunk under was accompanied by a tightly held nose and firmly closed lips to stop any of the manky liquid being taken on board. I loved all the mud, wading through it, crawling on it, under barbed wire, over mud moguls it was the most fun. At all mud obstacles you heard screams, expletives, laughter and most of all a bunch of humans enjoying mud together. I haven’t done that since I was a kid and you know what? It brilliant fun.

The walls and A frames were great, a mixture of brute force and ignorance meets Krypton factor!! As a foursome we were monumental in our teamwork and ingenuity, the overhang – no problem, the shocker – child’s play, the tunnels – a doddle.

On the other hand, running up the last hill to the monkey bars I almost lost the will to live. I was so tired and yet wanted so much not to hold up the guys.

My lowlight, but probably the most fun, was the monkey bars, the ladder felt never ending and as I neared the last two rungs my fingers would not close around it, my grip was going but I was soooooo close. Everyone was shouting encouragement – I could not fail – oooops spoke too soon! As I stared at my hand willing it to hold on I watched as, in slow motion, my fingers opened one by one and I dropped like the proverbial brick into another puddle of mud suspension ( you couldn’t call it water!). This time I was not so lucky with avoiding I taking in the liquid and it seemed like I was under for ages. As I dragged myself out of the pool we had one more obstacle to the end, a ramp like construction with a rope half way up – I stormed it, if I do say so myself. At the top when the marshall said you’ve done it I could have kissed him. 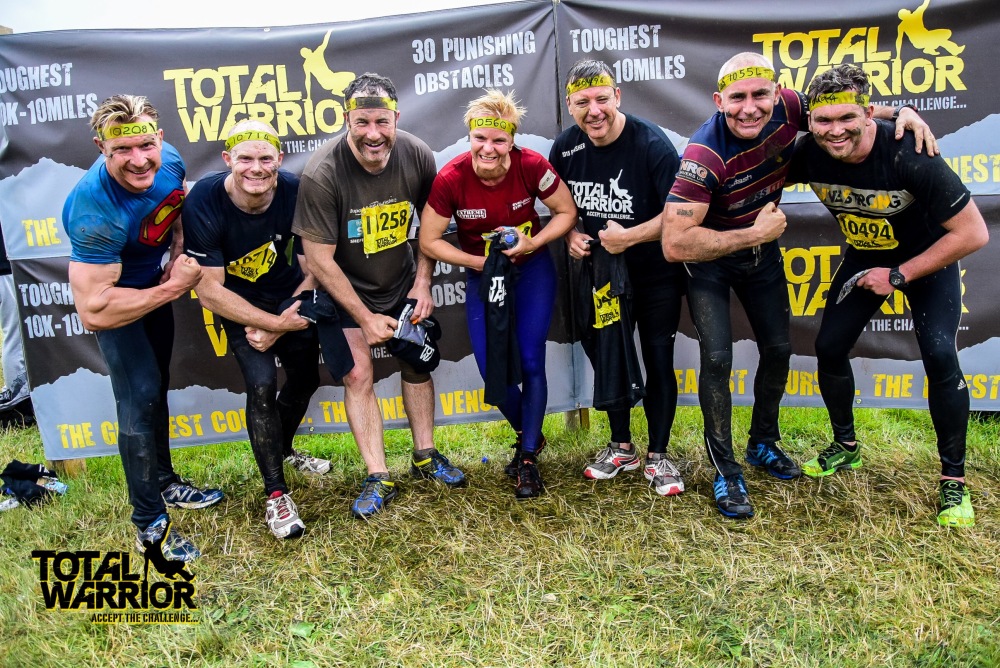 The end was rewarded with a beer, a bandana and a bar! The beer is still on he shelf if anyone wants it but I ate the bar and proudly sported the bandana. The obligatory event Tshirt is one I will wear often to remind me of the fun.

Tip 2 – never give up being a kid, enjoy the moment and do an obstacle race at least once with someone, anyone they don’t need to be close friends but you will rekindle that infectious laughter and happiness that comes with play. 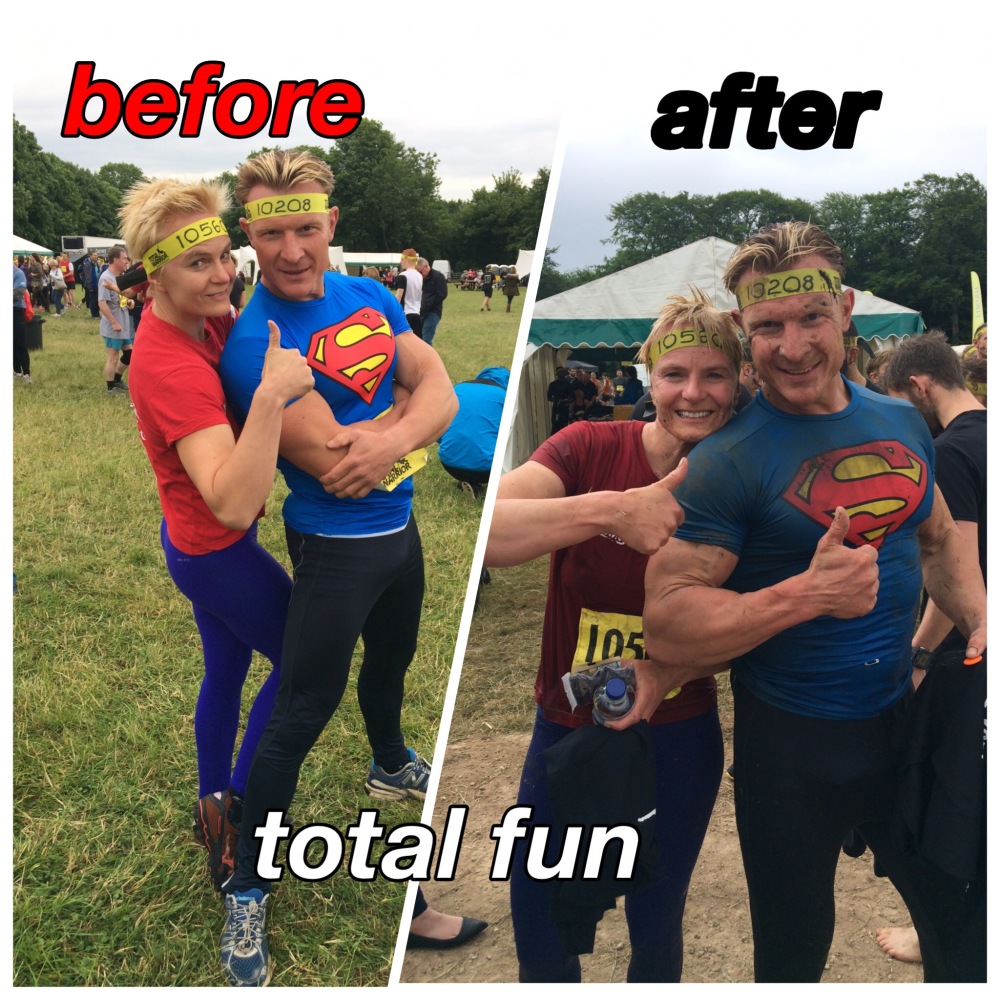