Well here I am on the road to Cleveland, not not the Cleveland in the UK but the US version. Stopping in the Brittania Hotel last night was a little like being in the middle of the United Nations. All nationalities together in a very tired hotel, I am assuming for the same reason of catching an early flight the day after. The room and the staff were awesome but the communal areas a little tired.

The APH staff were awesome as usual, its when I see the fish tank in the APH parking reception that I know I am nearly there and can start to relax. At the airport the queue for United was long and slow. The logistics created a distinct them and us for us mere economy passengers and the business and more who were continually ferried through whilst we stood patiently in line. Again the staff were great but we have paid real money for this, I did resort to a random tweet to united to say that when the check in clerks are free it would not be beneath them to serve an economy passenger ( I know it made me feel better though).

The flight was good and immigration at Newark painless until I arrived at baggage claim to find my newly purchased TOG24 bag with only half a zip. And guess what I have only completed half the journey – here’s hoping my tieing together helps it to last until I arrive at my final destination (oooh bad thoughts of the film of the same name). I checked it back in and hoped for the best, then to go back through security and sit for a while before my next flight.

Security, security I want to go through security, i have never seen queues like it in an airport and I did think I had seen some queues. We queued to join the next queue – three times we queued just to be allowed to move to the next holding area and join the next queue. Once in the security queue it moved well and I do love that X-ray type machine where you stand with your hands above your head – I think of the total recall film where they see the gun and the skeleton every time.

The guy in the gadget shop told me where the Starbucks was and now you find me here blogging. I have an hour until I board which is not bad to say I arrived here 3 hours ago and have just sat down.

Still I’m on my way to Youngstown, Ohio and am excited to see friends I met last year as well as my sisteract Vicky McCann and my partner in crime for this trip Guy. 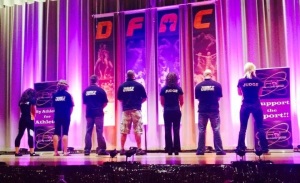 You gotta love a global corporation though and Starbucks takes the biscuit. I used my app in the airport Starbucks in Newark and even got credited with my reward star and some wifi.

Onward and upward once more into the sky.